The CCC in St. David and Patagonia, AZ

Water is a precious commodity in the Arizonan desert. Most of the year water is scarce, but when the rains do come during the summer monsoons, they come in a deluge.  This water often runs off and causes problems with soil erosion.  Controlling and conserving water are important to the people of southeast Arizona, particularly to those involved in the region’s cattle grazing industry.
During the late 1930s and 1940s, CCC Company 3840 worked in the St. David and Patagonia areas helping ranchers and residents combat soil erosion and conserve water. The federal Soil Conservation Service supervised their work, which involved building dams and rock spreaders, erecting stock tanks for cattle, revegetating the desert, and building roads and truck trails.
The boys of this camp came from Arizona, Oklahoma, and Texas. Outside of their work, they took classes, played sports, and went on trips to towns such as Bisbee, Tombstone, Benson, and Tucson. They enjoyed themselves at camp dances and films, and had a lot of fun telling stories about each other in the camp newspapers.
Duarte of the Beach Side camp reports his hand fit as a fiddle and ready for work in 3 or 4 months. [camp newspaper, 1938]

The greatest advantage of the pool tables is that Lieutenant Walker has no difficulty in locating his First Sergeant and Clerks. [camp newspaper, February 1936]
We will save on rations for awhile since the dentist pulled Campus’s teeth. It will also give   some of us fellows a chance to eat. [camp newspaper, January 1940]
The little girl that Jerry is infatuated with in Patagonia seems to take up three fourths of his thinking capacity. [camp newspaper, November 1939]
Brophy Wit?
Mr. David:         “Christian, that dike has to be finished in a hurry.”
L.P. Christian: “Well, sir, Rome wasn’t built in a day.”
Mr. David:         “I wasn’t bossing that job, either.”     [camp newspaper, June 1940]
I’ve written an extensive history of the St. David and Patagonia camps and compiled camp rosters; if you know anything about these camps or would like to know something, let me know! 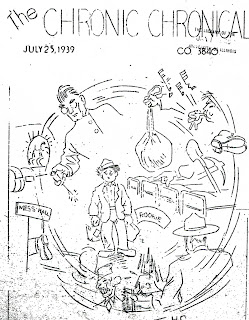 Sharon E. Hunt
I've been researching the story of the CCC for the past seven years, focusing on the CCC in southern Arizona and on the camp newspapers. I write articles, books, and presentations on the topic. I'm very fortunate to be friends with some of the "CCC boys," whose humor, hard work, and honesty bring me joy. I'm privileged to share their story of how they went from boys to men while working on enduring natural resources projects. When I'm not writing or working in the library, I'm editing, proofing, and indexing materials on the cultural and natural history of the West.